I had seen this movie awhile ago, and I quite enjoyed it. Now, that coming from me is a big statement.

I am not very nice in reviewing movies. Or I would like to believe so.

This movie makes no sense. Nada. I did not even bother trying to put two and two together to make sense of the timeline. It was just a mess.

But, it was a beautiful mess. Particularly, a certain someone. 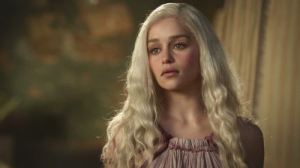 Okay, I had never seen the other Terminator movies before, and I had no expectation when I saw Genisys. And to be honest, the only reason I went to see it was because Emilia Clarke was the face of the poster. I did not even know what I got myself into, I just wanted to see my Khaleesi.

So Genisys murdered basically the other Terminator movies, and according to some people, the whole Terminator series.

Jai Courtney did well, in my opinion. Coming from hating him so much in Divergent, I grew to like him as Kyle Reese. He did well.

However, the whole time travel thing became completely unnecessary and forced. It also just made no sense.

I think midway through the movie I started thinking about how much I missed watching the Flash and the time travel there. It just made much more sense than Genisys.

I actually found it believable.

The romance between Kyle and Sarah, however, fell short. I did not feel a single thing. Whether they ended up together or not, I simply did not care. Jai Courtney delivered, in my opinion, and he played Kyle Reese well. However, as a love interest, I could not buy it. I just did not feel the chemistry.

The action was alright though. I enjoyed watching the fights and the run. I wondered how much training the actors had to go through before taking their roles in this movie. My, my, aren’t they fit.

And I think the action packed part was my favorite. I loved watching them run and fight for their lives. It was the entertainment I needed.

I did not like Jason Clarke’s performance. I found it difficult to buy his character. I could not put a finger on it, but I just could not relate.

Overall, the movie was pretty fun. I knew that if I googled it up I would run into some bad reviews, but it was the first Terminator movie I’d seen and I actually liked it.

I realized midway throughout the movie that the alternate timeline was off. And I knew that the movie was about to bump hard into some harsh comments. And I am not defending it in any way.

I am simply being honest that my only reason to watch Genisys was Emilia Clarke.