I remember watching this in 2001 when it first came out. And I remember thinking, “This is the best movie in the world.”

I still think it is. I am so sorry, Kuch Kuch Hota Hai.

But K3G is the ultimate movie. It makes me cry, laugh, smile, angry, and just so happy. I know for a fact that I need tons of tissues to accompany me watching this movie.

And a few days ago I thought, why not write the review?

Now, forgive me for my bias, because I grew up watching Bollywood. And since I grew up a dancer, I enjoyed the singing and dancing parts in the movies. I know a lot of people fast forward, which I don’t do, and I won’t discuss the musical part of K3G.

So here we have the Raichand family: filthy rich, extremely good looking, and happy. They have two sons, Rahul and Rohan. Rahul, despite being adopted, is the true love of his mother Nandini, because she raised him since he was a baby many years before Rohan was born. When Rahul was eight, he learned the truth of his adoption and started feeling indebted. Nandini ensured her son that he was loved no matter what, and hoped that the truth would someday be forgotten.

Then, years later, tragedy falls upon the Raichand estate.

Rahul falls in love with a loud, wild, working class named Anjali, whereas his father Yash has chosen a wife for him. Rahul initially obeys Yash and decides to give up on Anjali; however, when he finds out that Anjali’s father passes away and leaves his daughters in despair, he decides to marry Anjali without his parents’ blessings.

This enrages Yash, who then disowns Rahul and refuses him as his son. It also reminds Rahul that he was never Yash’s own blood, that it is easy for Yash to cut off ties with him.

With this, Rahul says his goodbye to Nandini, who sends with him his and Rohan’s nanny to look after his new family. Rahul visits Rohan, who is in boarding school, to say goodbye, and to take care of Nandini.

Then, Rahul, Anjali, and her sister Pooja leave for London. Along with them comes Sayeeda the nanny to look after them, under Nandini’s request.

And this is the fun part of the story. To be honest, up to this point, everything is a bit depressing. 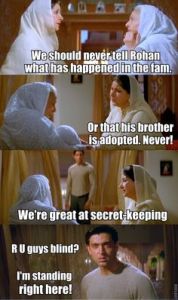 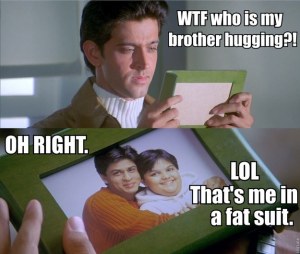 But ten years later, Rohan returns home and learns the truth of his older brother’s departure. So he searches for Rahul and learns that his brother resides in London. Wanting to reunite the family, Rohan convinces his parents to send him to London for grad school.

In London, Rohan approaches Pooja, who is his childhood friend, and asks her to help him to get into her house so that he can be close to Rahul. And from there, Rohan starts his plans to reunite his family. 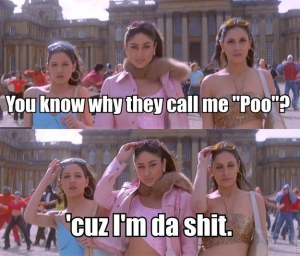 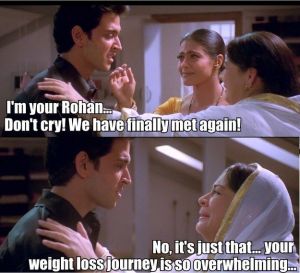 K3G is a wonderful movie. Many scenes never fail to make me cry. Well, every scene with Nandini always makes me cry. There is just something about a mother’s love that is just so…touching.

Everyone in this movie is a big star, and I don’t ever doubt their acting skills. We have legends starring in this movie. Even Rani Mukherji, even though she is only there for approx. 15 minutes of screen time, is there!

However, Jaya Bachchan is the winner. Her eyes could win her an Oscar.

She has, in her eyes, the pain of a mother who has lost her son. She displays, perfectly, the suffering of a woman who has to listen to her husband, even though her heart tells her no. She shows love like it is a bottomless sea, anger so silent that it speaks only in her eyes, and sadness in the most heart wrenching way.

I cry like a baby every time K3G is on.

But K3G is a movie that a lot of us need. It is not gory, slashing blood action-packed or cliche, repeated romance. It is family, and family comes first. This movie shows forgiveness of parents, unconditional love, and the happiness that family provides.

It shows that a parent can be wrong, and a pride can turn a loving heart into an unmoved rock. It shows that pain never kills love, and a bond between a mother and her child is incredible that Nandini can feel Rahul’s presence whenever he’s in the same building.

Gosh, I feel like crying just remembering that scene.

So family is the first and foremost, most important thing. And after watching K3G, I bet a lot of you will feel like hugging your mothers or calling them to tell them, “I love you, mom.”

It is truly a good movie. And I’ve seen it more than enough times since I was 9 – oh wow, yes, that’s a really long time – and I will still see it when I need a good cry and a good reminder that family comes first.