Cookie Lyon is EVERYTHING. She is fierce, loyal, real, and strong. She’s the strongest, most unbreakable Lyon.

She was in prison for 17 years because she refused to snitch on her husband, Luscious. And even though he betrayed her, she still showed loyalty towards him. Because to her, he was still family.

When she got out of jail, she went straight after what was rightfully hers.

She loves and accepts each and every one of her sons. She tells it like it is. She carries a gun wherever she goes because she knows she’s a moving target to many.

She will hurt anyone who dares touch her sons. She fights for the family. She understands music like no other. She’s intelligent, and she outsmarts anyone who tries to take her down.

She is a fighter, a manager, a supporter, a leader, and a mother.

And I love her. She is the true Lyon.

Also, if you’re into fashion, she’s the one you should watch. Taraji P. Henson is one heck of a beautiful, stunning lady. So beautiful. 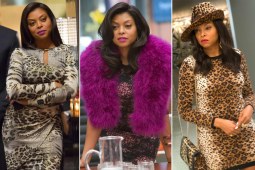