I waited for this for so long. So so long.

And it was a good start.

So we started with a Savage, the man who’d been chasing Chay-Ara and Khufu for thousands of years, conquering the planet and murdering a mother and her child, Jonas.

Jonas’s father, a time master Rip Hunter, decided to take the matter into his own hands.

He went back to 2016 and recruited eight special people: Ray Palmer the Atom, Sara Lance the White Canary, Dr. Stein and Jefferson aka F.I.R.E.S.T.O.R.M, Chay-Ara and Khufu the Hawks, and at last Snart and Rory or Captain Cold and Heat Wave the criminals. 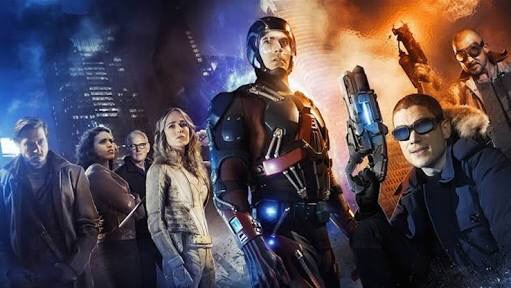 These people didn’t exactly get along. The pair that actually got along the best was Snart and Rory the criminals. I wouldn’t put my money on the Hawks or F.I.R.E.S.T.O.R.M pair. They were a mess.

Hunter lied and told these heroes that they would be legends someday based on their contribution towards the battle against Savage. They ended up going with Hunter willingly, all except for Jefferson who was drugged and dragged along by Stein.

They got on a huge ship that could time travel. It was pretty cool and it could camouflage.

They went back to the past to find a professor who would know Savage’s whereabout. As it turned out, the professor was Chay-Ara and Khufu’s son from one of their lifetimes. Supposedly, he was to die 24 hours from the visit time; however, Chay-Ara insisted that he came with them to avoid his death.

Kronos a bounty hunter from the future started attacking the ship when most of the team members were away (except for poor little Jefferson). And the team returned to fight him.

During the fight, unfortunately, the hawk child got shot and died later on. The changes in time travel still couldn’t change the inevitable death. And that sparked something in Chay Ara.

So the team realized that Hunter had lied to them about being legends and that he was authorized to recruit them on this mission. They demanded him a reason as to why he was after Savage. Hunter finally opened up and told the team that his wife and son had been murdered by Savage in the future.

So the team decided to get on board with Hunter and to kill Savage.

Due to some idiocy of the team, ignoring warning from Hunter and attacking Savage’s team, they exposed a very important advanced technology of Atom’s to Savage. Who later on used it to build weapons.

Threatened by this, Hunter took the team around 1975 to stop it.

Long story short, Stein got to meet his younger self with Jefferson and Sara. Ray and the criminal pair were to steal from Savage’s place. And the Hawks were to figure out what a dagger carving meant.

When Snart and Ray got captured, the team went to rescue them. Believing that the dagger could kill Savage, Khufu ran after Savage and stabbed him.

However, the dagger belonged to Chay Ara, and only she could kill Savage.

So Savage killed Khufu, who told Chay Ara to “Come back to me,” because that’s what most dramatic, hopeless romantic would say. Chay Ara got stabbed by Savage.

And before he could finish her, Atom emerged and blasted him few feet off.

So they took Chay Ara back to the ship to heal her, and they decided to let the rest slip. Khufu was dead.

And now, his death got the team to finally wake up to see what the real danger was and to gather around together as a real team.

Then they went off to their next adventure.

This show lacks emotional depth. And it’s not bad, but it might be in the long run.

The characters carried out their background stories in such ways that they didn’t really matter to us the audience.

I couldn’t feel emotionally connected to them. And that, hopefully, will change in upcoming episodes.

The CGI effects were horrible. That I had to say. But, I liked the aesthetics of this show. I loved the settings, I loved the characters, and I loved the story.

The team members lack chemistry. Something that I am waiting for to change. I want to see them work as a unit, not as different pons moving separately on a chess board. And not even in one color.

If you had seen Snart and Rory you probably know what I meant.

However, for a start, Legends of Tomorrow did well. I was excited when I first saw the trailer, and to be honest, my excitement died down when I saw the first pilot episodes. But I have big hope.