So week 6 went pretty well. It was interesting.

I went on Tuesday, and apparently a group of middle aged Japanese ladies joined in.

There were five of them, about my mom’s age, and they looked so fit they scared me.

They moved slowly, full of grace, so I thought, okay, this would be an easy routine.

Of course, the trainer made me do more push-ups and sit-ups than what they did, but it still felt like a breeze.

Until, we got to the pad work.

These ladies moved slowly, and full of grace, yes. But hell broke loose the moment their legs hit the target.

They might be slow, but they could burn someone with their kicks.

So powerful. Who knew old ladies got so much strength?

I sat on the back, trying to blend myself in with the white wall, since I grew more and more pale as their kicks just got louder and more deadly.

“Please don’t call on me,” I kept on praying.

But of course, they did not. They kept it to themselves. They only spoke to each other, and in Japanese, and ignored me completely.

My trainer, however, let us all out early. So I was released. Of course, I did not feel like I had done anything since I was busy hiding from people who did not even reckon I existed.

Result: My pride gone. I got, a bit less excited about going to Japan this summer, and I definitely grew scared of Japanese women now. Except for my cousin, of course, because she’s awesome. 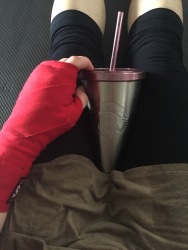 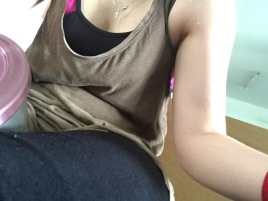 On Friday I went again. As usual.

This time, I got two boys joining. Seriously, something was up with this week. It was like, the gods decided that my pathetic movements had to be witnessed. Somewhat.

I was on board with the chubby guy; I really did not want to be seen doing my ridiculous stunts.

But, I was really surprised when I realized that my warm up – stretching routine was much harder than theirs. I had to run more, do more push ups (I do military ones), and sit ups. The trainer told the boys to “try beat the girl” and I blushed a little.

If this had been done during the first week, I’d have gone home right away without even saying a word.

The boys avoided me as much as they could. Every single time we got break time, they left the gym, sat outside, and talked among themselves. Just like the Japanese ladies, they were keen to ignore me.

I did not mind. During break times, I always tried to beat my own record in sit ups and push ups – so I would not want to waste my time on small talk with strangers who obviously did not want to talk to me.

My trainer gave me few more moves to learn. It was to block opponent’s kicks and avoid their blows. I kept on messing the moves and got right and left mixed up. It was more difficult than I thought.

But one thing I learned that day on Muay Thai was that: there are tons of moves, and some you don’t even think of, especially if you’re like me, an amateur.

When we were dismissed, the boys left right away. To be fair, I did laugh at them during pad work. I did not deserve their friendship. Even though, I got punished by having to practice my kicks on the punching sack. Let’s just say my feet felt numb. 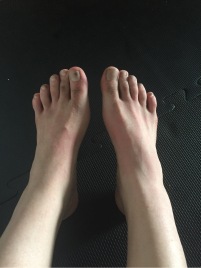 Result: Arms! Also, my calves grew bigger. Now, I have to think of ways to fix that. But I am not sure how I can. I mean, what do you do to growing calves?
Week 7 will be remembered as the week of hell.

I went on Tuesday, and it was a good workout. This time, nobody joined me, but there was a pre teenager having another session with another trainer the same time I was training.

I realized then that it was so nice being a kid. He barely got to do anything too hard, because the trainer loved the kid and knew that at that age, damn, metabolism worked like magic.

My trainer gave me ten minutes of jogging, during which I expressed my disappointment in the unfair treatment he’d been displaying. How is it that every single time other people joined my training (or me joining theirs), they were all allowed to walk except for me? And I’d seen people walk instead of run – but I was not allowed to slow down or walk at all.

It hit me after the training that it was stupid, I should have been grateful instead.

We continued with the new moves. I had to think really fast to avoid being bruised. And it was hard because they were different for each side. Right side got different steps that did not mirror left.

However, when I was told to start punching the punching bag, I got better. My kicks did not miss as much as they used to – and you could actually hear me punching a bag – not just a soft smash.

My legs, the biggest mystery of the week, did not get bruised.

Sadly, during the training, I fell because my stomach was in horrid pain and I just knew that period was coming. The trainer gave me two minutes to get back on my feet and back to the training. 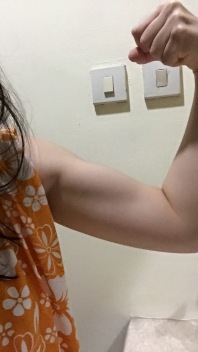 Result: ARMS! And I’ll be damned. How do you get rid of growing calves?!
Also, on Wednesday I got my period, and I ended up in bed for the rest of the week because period is always the worst time for me. I cry and bleed and throw up and do other disgusting, should-not-be-seen things.