What the hell did I just watch? Meanwhile, Daniella loves this movie and is probably watching it again right now.

So if I had never appreciated Jaime Lannister enough, Horus opened my eyes to it.

Nikolaj Coster-Waldau, how did you end up here?

And don’t get me started on Gerard Butler, my action movies’ hero, who wanted more and became a god, and finally disappointed me.

Or that’s what I’m telling myself. Denial got me here.

I have so many questions. So many of them. But who cares, I will just google them later.

Let’s get to the plot. So back in the simpler age, Egypt was ruled by two gods, two brothers Osiris and Set. Osiris was king, and one day, he decided to name his son, Horus, king.

Unfortunately, Set led a rebel force and killed his brother Osiris during the coronation, then took the crown and named himself king.

He took Horus’ eyes, which are the source of the boy’s power, and banished him.

His eyes were hidden, and only Indiana Jones could get them.

However, a thief named Bek pulled some stunts and got one of the eyes. He then took it to the wasted Horus and offered to him in exchange of a favor: bring back someone from the dead.

Now, the boy and the wasted god had to figure out a way to defeat Set.

It wasn’t so bad to write that all up.

This wasn’t half as entertaining as I thought it would be. The CGI effects were obvious. The acting was painful to watch.

Why would you put Elodie Yung, such wonderful talent, in this movie?

But, for all of you who love Chadwick Boseman as much as I do, you will get to see his clones. Imagine a lot of Bose-men in a room. Acting like C3Po. 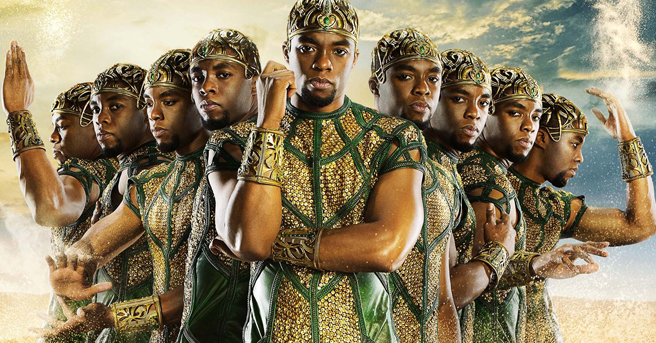 The story has so much cliche that I find it hard to tolerate at times. I wish midway that I had been Horus, and that my eyes had been taken from me.

Given that though, it’s also important to acknowledge that this movie succeeds in entertaining people who appreciate history and love Egypt. Take Daniella, for instance, she adores this movie. It certainly does have some perks of “The Mummy” which is her favorite movie of all time. And on that note, it’s really good.

Overall, this movie gets a 5/10. I wish it had entertained me more. I really do. And considering the CGI effects, I believe this is a fair score. But, knowing that my best friend is rewatching it – and possibly some day I will get the privilege of watching it on her laptop when she’s bought it or downloaded it, I will give this a 7/10 on personal scale.

Because I know that I have to see it again someday, might as well love it now.

But it does a good job in depicting the gods – some of the things in this movie serve some justice to the gods we love. So really, as I have said a million times over, it isn’t that bad.

I mean, check out Anubis! Damn.

2 thoughts on “Gods of Egypt: Blinded”