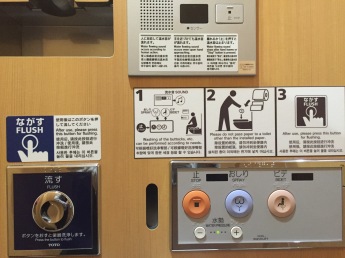 Wherever you go, bathroom is the best place you see.

Each stall got butt spray and automatic flush and everything else you never even thought you’d need.

It’s insane and I’d love to have one installed in my house someday.

Like, what on earth is this? This is crazy!

And you even got a map on which stalls are vacant and which aren’t.

And these photos were taken at a rest area, seriously, look at this. How in the world?

I don’t know about the men’s toilet, but it’s probably just as cool as this.

The other tourists were taking photos as well by the way, so I wasn’t the only weirdo snapping here and there in the women’s bathroom. Just in case you’re wondering. 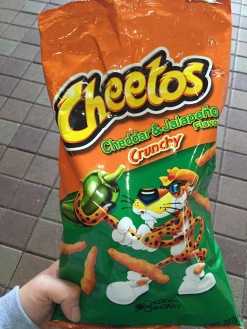 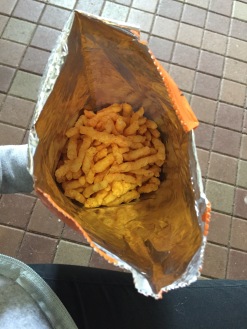 I mean, not like I expected anything less. But I bought cheddar jalapeño Cheetos, which is one of my favorite things in the world, and it was weird.

They taste healthy and they’re skinny.

And that’s not something I’m used to. At first, I hated it. I refused to eat it because well, how is that healthy thing Cheetos? Cheetos ain’t healthy!

But then they grew on me and before I knew it, I was munching them at night while watching Harry Potter. Argh.

I spent two days at Disneyland and Disney Sea and learned the hard way that the workers there didn’t speak English. They’d continue speaking to you in Japanese even when they knew you were foreigners.

It was like, “Alright. I know you’re not from here. But this is our language and I speak it.”

There were a couple of people who tried to help me when I had questions. They opened up this big book of phrases (Japanese – English) and I felt so bad for that. I should’ve learned the language before visiting. Not make them speak English to visitors.

4. Everyone or everything is polished.

I can say that to most big cities in the world, but usually that applies to the ladies.

Here, boys and girls dress up well. Like, really well. Everyone wears makeup.

I thought I dressed up well in college, then I realized I’d look like a hobo in Japan.

Food looks like perfection. It’s either wrapped neatly, or shaped neatly. Look at that watermelon! It’s a pyramid! The other one’s a heart! What!?

The streets are super clean too, by the way, you don’t see shits lying around the streets. 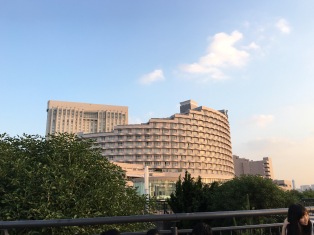 They must have taken a long time to make everything perfect. Because it seems like it. It looks like the country of perfection.

I heard from people who live and work there that it’s considered rude to have your pores seen, so your make up has to be flawless.

Considering my knowledge on make up is almost zero, I’m glad I don’t live there. But it’s such a beautiful place, I mean, how can you not? 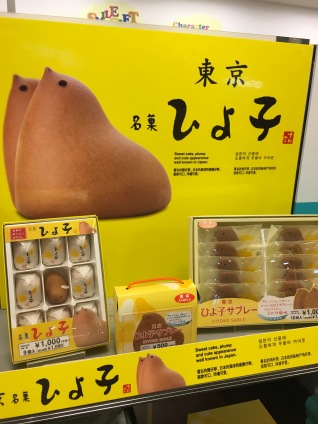 Seriously. The people. The food. The places. The way they speak. Their expression.

I don’t know why anyone Japanese would ever want to leave their country. Except that, well, living cost is pretty expensive and properties aren’t exactly going to be something they can have.

4 thoughts on “How Japan Amazed Me ”