If you watch this drama weekly like I do, you probably cheered like crazy at the end of episode 12. Why? Because it was epic.

Let me repeat for the 1000th time that I am not a fan of romance. I admit I watch it when there’s nothing else to watch, or like now, after Westworld left me and I’ve re watched Game of Thrones too many times that I think I need to take a break for a bit…

And even the cheesiest of cheesy didn’t win me over. Yes, I’m looking at you, Notebook.

But Weightlifting Fairy Kim Bok Joo won me over. I fell in love with Bok Joo. I care about this girl. So much that when she cries, I cry. When she smiles, I smile. When she laughs, I laugh.

The best part of this drama, other than Bok Joo herself, is Joon Hyung, who is the ‘other guy’ finally winning for the first time.

My sister made me watch She Was Pretty the other day and I was upset that the girl got the guy she liked. Of course, the guy was ‘actually’ nice (very typical) and just didn’t realize she was the girl he’d been looking for… yadaah yadaah. Thing is, there was a guy who actually liked the girl from day 1, a very kind guy, and he got rejected. More than twice. It burned me.

You can say, “But Devina, Joon Hyung is the main guy. Jae Yi is the other guy.” 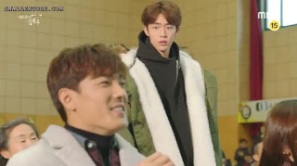 However, Bok Joo fell in love with Jae Yi first, and she was after him for so long. She did whatever she could to be close to him, and she didn’t even notice Joon Hyung who was there the whole time.

And in the end, he got her. He finally got the girl he’d been head over heels for since the second episode.

I’d written before, in Weightlifting Fairy Kim Bok Joo is a Must Watch how this drama is refreshing in the fact that it’s not like 90% of other dramas, and it hasn’t proven me wrong. It’s still a breath of fresh air until now.

There are so many life lessons as well in this show, and you can’t help but take notes and learn. It teaches you so much about love, in so many ways.

Like how Bok Joo had to lie to Jae Yi about what she did and who she was, and how she told Joon Hyung everything there was about herself. Or how Joon Hyung supported Bok Joo in everything and at all times, even when it broke his heart, because he always put her first. Or how in the end, what won Bok Joo over was not Joon Hyung’s romancing her after his confession, but it was her realizing that Joon Hyung had been there all this time for her, readily loving and accepting her for who she was.

Seriously, I can go on and on. And how this drama did the one thing I thought was impossible: melt the big block of ice in my heart.

Damn, Bok Joo, I just want to see you smile.

2 thoughts on “I Won’t Wait Till It Ends to Say: Weightlifting Fairy Kim Bok Joo is the Best Kdrama I’ve Ever Seen”