It is safe to watch the ending, y’all. It is safe! You won’t need tissues.

The Legend of the Blue Sea ended with a BIG SMILE. Literally. Big smiles.

I was worried when I saw episode 19, in which Chung was hurting and Joon Jae decided to let her go back to the ocean, because hey, she was supposed to be fine as long as he loved her back. Right?

I guess bullet crushed her strength.

He let her go and gave her the option to either erase his memories, or let him keep them. So that was the cliffhanger of episode 19.

I guessed that this series would end happily because to me, it’s always been dragging. The pace is a bit slow, as if they’re really taking their time filming it. Which isn’t an issue, everyone is beautiful, the story is well written, and the reincarnation plot line is cool. But you know they reveal one conflict at a time, sometimes let us drown in episodes of pure comedy and love, and sometimes just drop us off a cliff.

But due to that pace, I knew where this was going.

And well, it’s a safe series to binge on! You won’t end up crying a bunch like *coughs* Goblin. Which, I so adore that I’m going to recommend to everyone who needs some awesome Dokkaebi boyfriend fantasy.

So Chung left after erasing everyone’s memories, except for little Yoona (little girl I’m going to miss your face so much) whose memories couldn’t be erased. As it turned out, she remembered hundreds of years back when Se Hwa asked her for help. Little Yoona is a badass. Who needs Dam Ryeong and Joon Jae when you have someone as cute as Yoona?

Joon Jae woke up the next day and found a pearl on his nightstand. And everything went on as if Chung never came to Seoul.

But then of course, Joon Jae was different. He stopped being a con artist, and seemed happy. However, Nam Doo noticed that Joon Jae had changed and he’d go to the beach a lot.

Three years later, our mermaid returned for her love.

When she came to the house, Nam Doo wasn’t welcoming, but Joon Jae’s mom let her inside and they waited for Joon Jae together.

However, when Joon Jae arrived, he didn’t remember her and Chung left hurriedly. She went to the spot where Joon Jae was about to present her with the pink octopus three years back, before he got arrested.

It was snowing, and Chung hugged herself in the cold, sad that she was without her Joon Jae.

But then… Joon Jae found her, the same way he found her outside the mall in Spain. With an umbrella, taking her hand.

It was so poetic, that he always found her and took her hand. Be it when Dam Ryeong took Se Hwa’s hand, or when Joon Jae couldn’t leave Chung alone and came back to get her back in Spain. Physical touch with a mermaid was feared, since we knew that mermaids had the power to erase memories. Just as Dam Ryeong and Joon Jae were guarded with their hearts, they took the mermaids’ hands and always came back to find them. Fear and love, who knew.

And Joon Jae confessed that he didn’t forget, because he’d kept a diary in which he wrote everything that happened: the Dam Ryeong timeline, their adventure in Spain, and their life in Seoul as well. Well done, Joon Jae. He also confessed to have been looking for her, and looking at houses to buy, somewhere by the sea.

So after we got that confession, we got our happy ending. 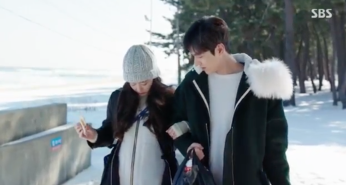 Chung and Joon Jae got married, moved to their own place, and were expecting a mer…baby?

I mean, I don’t know if that baby is going to be like Ariel’s and Eric’s daughter Melody (anyone’s seen Disney’s Little Mermaid II?) who is basically human but is very much drawn to the sea. Or, if the baby will turn out to be able to adapt just like Chung. But it’s good to know that the couple got married and live happily together.

It means Joon Jae succeeded in making Dam Ryeong’s dreams come true. He finally got to break that tragic tale and have his happy ending with Chung.

Phew, that didn’t break my heart at all.

Okay, so now we have to say goodbye to our new favourite mermaid. Gianna Jun, you beautiful mermaid! I’ll miss you.

This was a fun series to watch, and now that I’ve seen the whole story, even though it’s heartbreaking every now and then (Dam Ryeong and Se Hwa, for instance), it’s harmless. It’s light and fluffy a lot of the times, and who doesn’t like fantasy?

It might be a bit slow, and the plot is dragging at times, but if you like looking at beautiful people and you fancy mermaids, this is it for you.