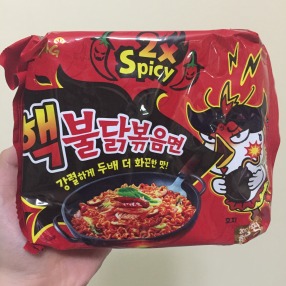 I must admit, I didn’t know it wasn’t supposed to be without soup. Oops.

I mean, the picture said so, but I couldn’t read whatever it said on the back of the package (No, I only know basic Korean, which is not enough to know what to do with instant ramen).

My sister spotted this online few weeks back, and she said, “Let’s order this for you.”

I’m a big fan of Samyang buldak, which I’ve considered as one of the main to comfort foods because it makes me feel warm inside. So, when I saw this, I went, “Hell yes. Let’s.”

Now, I had no idea that this was supposed to be fried. I was too excited to try to translate anything. I literally just opened the package, cooked everything, and prepared myself for a treat.

So, I will try again next time, the right way.

But I can tell you this, what does not burn on the tongue, will burn elsewhere. The back of my throat was on fire. Halfway through the bowl I started sweating. And tears! Tears welled up my eyes.

My tongue didn’t feel anything, but the heat was creeping up. Fast.

I didn’t have to drink water because it really didn’t feel like much to my tongue, but I had to grab napkins every two minutes or so. And because I did not prepare this correctly (I mean, look at the soup), I drank the soup all the way clean.

It was, after all, delicious. And two hours later, my stomach still feels burned.

This Samyang is burning me everywhere else but tongue, which is expected. Samyang has always been more of the heat than the spice, at least to me.

And this one has won my approval.

I still have five more in the kitchen, so one of these days eventually I’ll prepare it correctly and have it the right way. Even though I’m sure it’ll have the same effects on me. And my stomach will still be burning two hours after.

Would I recommend this? Yes. If you like spicy foods, go for it. If your stomach isn’t made of steel (I’d like to believe mine is… but never mind) don’t try this. It burns.