I miss you already.

The movie started with Logan killing few men after he got attacked, and driving off to work. Oh, and he’s a limo driver now. Uber has never looked so hot.

He’s bitter, old, and broken. Logan’s reached that state when he can’t be fixed anymore.

Apparently, Logan has been looking after Charles, who’s kept away from the crowd so that he wouldn’t be hurting anyone. Caliban is helping Logan, but is struggling due to Logan’s unwillingness to open up or talk about what’s going on in his life.

Out of the blue, a nurse named Gabriella comes to Logan and asks him for his help. Logan who isn’t interested, tells her to leave, and spots a little girl staring at him from the woman’s car.

As it turns out, the little girl is X23, or Laura, a girl who’s been a project of an organization that creates mutant army named Transigent. She was created with Logan’s traits. In a way, she is Logan’s child.

Charles, Laura, and Logan escape right on time when the Reavers, from Transigent, find them, and drive away to a place called ‘Eden,’ where Laura and the other children have decided to go for. And ‘Eden’ was first spotted in an XMen comic book as the safe haven for mutants.

During their dangerous trip, the Reavers introduce them to X24, a copy of Logan, who kills Charles and tries to take Laura away before Logan saves her.

After burying Charles, Logan and Laura go for Eden, and when Logan is struggling to heal, Laura looks after him and drives them both to her friends.

Obviously, the Reavers won’t leave them alone. Not until they get what they want.

I want to cry a little just writing this. Because I grew up loving Wolverine. I watched all of the movies, despite not liking some of them. And I just really love Hugh Jackman’s Wolverine. He’s the one and only.

The action scenes in this movie are incredible. I enjoy every single second of the stabbing, ripping apart, and killing. Marvel isn’t holding back. Not on the last movie for this Wolverine. 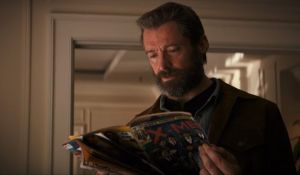 The pain and bitterness that Logan felt are so relatable. He’d lost everyone he cared about, and Charles needed him. He couldn’t just fly away because he felt responsible over his father figure, and he couldn’t run away from his self destruction either. The adamantium was killing him slowly, and there was nothing he could do about it.

He saw himself in Laura, and decided to protect the girl. And he and Laura mirrored each other. As she was learning about outside relationships, he was learning to forgive himself by looking out for her. They were so different and yet so alike, and their relationship made the whole movie heart wrenching and oh, so so sad.

Laura was a fun addition to the team. She was naive, guarded, and yet just a child. She wanted what other children longed for, love. And it was fun to see Laura going around trying to figure things out, or just simply frustrating Logan. Her relationship with Charles was also a heartbreaking one in this movie. I won’t go to explain how much it hurts me.

Sigh. What a good movie.

There are, of course, errors in the movie, which I am sure ‘Everything Wrong with’ will point out in a couple of months. Like, Gabriella’s farewell video. Or, Laura’s convenient reveals every here and there. Little details that made me laugh a little while watching this, although the overall experience left me feeling broken more than amused.

We know that Laura will rise to be the next Wolverine, and that she’s going to be Logan’s legacy. But damn, that hurts. Just watching this.

Hugh Jackman delivered. Amazingly well. So did Dafne Keen. That child. That beautiful child won me over. And I couldn’t imagine a better young Laura than this girl. Their chemistry was solid. Their performance, off the chart.

Logan is a solid 8/10 from me. Please watch it. If you love Wolverine, that is.

Oh, and don’t wait for post credit scene. There’s none.