Season 7 started 12 hours ago, and I was leaping in joy.

We started with Arya Stark slaughtering the house of Frey, and it was awesome. She is really dangerous, and I’m loving it.

She is a wolf, in sheep’s clothing, killing the sheep one party at a time.

Then we get to look at the walkers, in Bran’s vision. Bran and Meera made it to the wall, and let’s hope nothing bad would happen to them now. 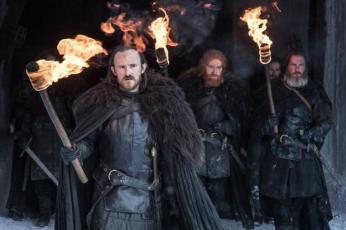 As for the Stark cousins, Jon and Sansa, it looks like something is about to go down. They don’t seem very happy with each other, and just putting up smiles as proofs that they support each other. I mean, the only one truly backing up Jon at this point is probably Lady Mormont. The little bear was louder than anyone else in the room.

Sansa and Jon didn’t agree on some things, and I can’t say who was right or who was wrong. Sansa had a point, and so did Jon. Jon worries me though, since he seemed like he was ready to say no to anything Sansa suggested just because he wanted to keep his pride.

I love Lyanna Mormont. So much. This girl. This girl is everything.

The Lannister twins were at odds. Well, I mean, their kids died. All of them. Cersei couldn’t even see past anything but her throne. She would just kill everyone trying to get to her. She also got super upset that Tyrion was named hand of the queen, the strongest one too right now, Daenerys Targaryen. Tyrion, watch your back. 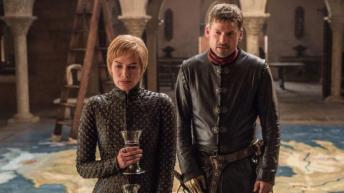 Also, Cersei invited the rock and roll Greyjoy to her castle and he wanted to woo her. Euron looked amazing, and slightly out of time. Something about him screamed Oberyn somehow, and I’m not sure how I feel about it. Euron, you are not Oberyn!

Sam, oh poor Sam. So dream job wasn’t exactly good to him. He became a librarian who cleaned sick people’s shit bowls and served them food from what looked like the same shit bowls. He looked like he was fighting the urge to throw up every single day, every time he had to clean the shit bowls, and I couldn’t help but notice how well done and at the same time, disgusting the scene was.

Sam found a restricted are which, according to his mentor Archmaester Weyland, contained information on how to kill the white walkers. Since Sam wasn’t a maester, and only maesters were allowed to go there. So he stole the keys and went there, bagging some books and reading them back home.

Back in the north, Tormund tried to make a move on Brienne. Poor guy. I actually think he has a chance. Brienne is still as amazing as always. Gods, I love that lady. 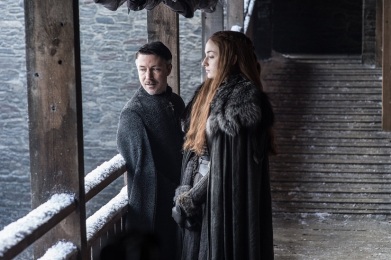 Littlefinger cozied up to Sansa, asking her if she was happy. Because he wanted her to be safe and happy. Ha. Dude, take a hint.

Arya Stark ran into a group of Lannister men in the woods. She found them because of a singing voice… of Ed Sheeran. He was busy promoting his new album in Westeros. This year, everyone, Ed is really busy.

From Galway Girl to Shae. Well, in the book that is. 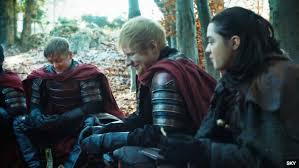 Arya sat down with the boys and actually enjoyed her time with them. They were good men, unlike everyone else Arya had run into. I think, Arya is finding her way back into being a true Stark again. She needs to see that there are also good men out there, and to well, live and be a kid. Laugh with people her age, drink and share a meal with others, and just be happy for once. This scene means a lot to me because I am seeing the old Arya again, and I’ve missed that girl.

Speaking of Arya, the Hound didn’t seem to be all that happy with his new friends. They found a house in the cold, a too familiar house he obviously remembered from his adventures with Arya. There, the men had a heart to fire talk and converted the Hound into a believer. He now knew that there were armies of the dead. Well, that escalated quickly.

With only about 15 minutes left on the show, I got worried. I mean, in the opening credit, the first name that popped up was “Peter Dinklage” so he would be in the episode, right? I mean, obviously. The opening credit wouldn’t lie.

But where’s my little man? 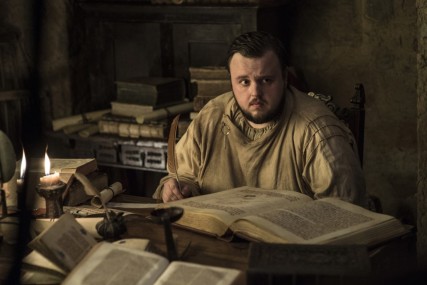 Back with Sam, reading the books he ‘borrowed.’ He discovered that there was a  mountain of dragon glass in Dragonstone, conveniently stored up right there, where Daenerys Targaryen was heading to.

The next day, Sam was taking empty food bowls from what looked like prison cells. Apparently, one of the patients reached out to him and asked if Daenerys had come. Jorah Mormont! I was wondering where you were! 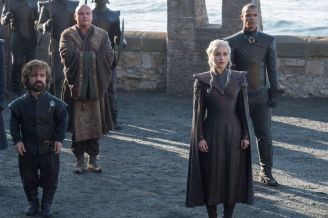 This scene was stunning. Nobody said a single word, as they toured their new rent free house. I was actually waiting for someone to welcome them and taking them on the tour. You know, like Lumiere in Beauty and the Beast. But no, these kids had to figure out everything on their own.

Daenerys, girl, you’re so covered up I got concerned. Gorgeous, as always, of course, but looking really conservative.

Remember back in season 1 when she got naked a lot? Well, no more of that now.

She then got to the map room, where she looked out and asked, “Shall we begin?” to her amazingly, oh so awesome, hand of the queen, my man Tyrion Lannister.

In the preview for next week, we see Nymeria. And I am freaking out.