Aquaman: Half Hero Half King.

All we needed to get us to watch this movie was Jason Momoa on the cover. Literally, that was it. 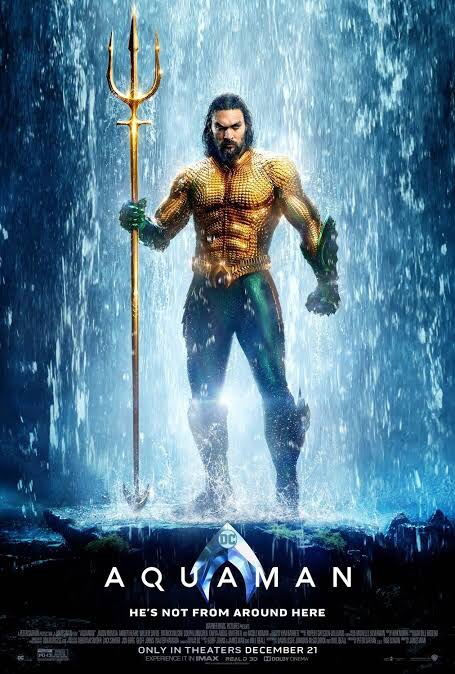 I mean, just look at him.

Most of my friends couldn’t care less about Aquaman, especially since we were somewhat brainwashed into thinking that he wasn’t as important as the others in Justice League. Even in the comics, I questioned him the most. But Jason Momoa was something else. I know some girls who actually stopped watching Game of Thrones because Khal Drogo died. No more Momoa, no more Game of Thrones.

So it wasn’t a surprise to me that some of my friends, mostly girls, who didn’t fancy DC movies at all, suddenly decided to watch Aquaman.

And we started with Atlanna, queen of Atlantis, found stranded on the shore by the light house keeper. He took her in and cared for her, they both fell in love and had Arthur, a son of the land and sea.

Unfortunately, Atlanna was betrothed when she ran away to land, and her people came looking for her. So to protect her husband and son, she decided to return to her kingdom and marry her fiancé.

Years later, Arthur was a wild card, free spirited Aquaman. He fought with the Justice League in that movie, really, and lived his life helping people whenever he could.

Then one day, Mera, a princess who was betrothed to Arthur’s half brother, tracked him down and asked him to fight for his right to the throne in Atlantis.

As it turned out, Arthur’s half brother Orm was planning to declare war against the humans, and it was up to Arthur to stop him and bring peace to both worlds.

Of course it wasn’t easy, as Arthur was no Atlantan. When Orm almost beat him at a challenge, Mera took Arthur away and they went on a quest to find the trident of Atlan, which was the most powerful weapon in the ocean. Only the worthy king could hold it.

Believing that Arthur was the rightful king the world needed, Mera guided and accompanied Arthur on this suicide mission, hoping that somehow, they would succeed and bring back peace to the world.

I got to laugh a lot, and it’s pretty good considering how dark DC movies have been lately. Aquaman is a funny guy, something I didn’t expect, especially in comparison to the comic books. And Mera was cast perfectly.

There was a lot going on in this movie, and I didn’t mind them much. I actually enjoyed the little bits in the story. I thought the whole thing was fun and for once, we didn’t get a DC movie that was too serious and gloomy.

Jason Momoa was very much himself in this movie, and I liked it. I could definitely see him as Arthur Curry, so it worked out in the end.

Some moments in this movie were cliche and laughable; but it’s as if the production house acknowledged this, and just had fun with the whole setting. I won’t lie, there were times my friends and I went, “Whoah, really? Did they really just do that?!”

It’s pretty much a harmless movie with a lot of fun. And I went to see it twice.

Besides, it’s Jason Momoa. What a sight for sore eyes.

Aquaman is an 8/10 for me. Absolutely would recommend it to anyone. Even if you don’t like DC movies, this is one to watch.