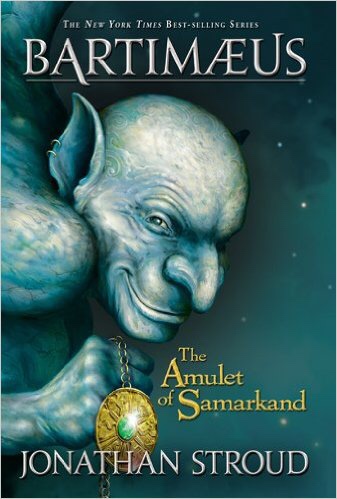 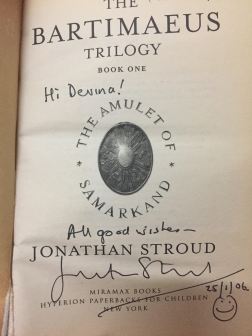 When I met Mr. Stroud over a decade ago at Blue Willow Bookshop in Houston, I was beyond happy. I remember begging my mom to take me to see him after school, and I rushed there still in my uniform, bringing the copy of my book for him to sign. I remember opening the book to page 191 and telling him that, “I marked this page because there’s my name on it. My name’s Devina,” and as it turned out (if I remember it correctly) it was also his mother in law’s name.

I still ask my mother every now and then if she can find the long lost picture taken of me and him.

This book became a treasure then. Because Mr. Stroud signed it. I don’t care if thousands of people share the smiley face, this one was done when he talked to me.

Okay. So the book.

Bartimaeus: the Amulet of Samarkand is the first book of the Bartimaeus series. It’s one of my favorites of all time, and it’s a story that I wish we could witness on screen. I’m not sure if a movie or a show is ever going to happen, but it would be quite a wild one.

Once there was a talented, young apprentice of a magician, a 12 year old boy named Nathaniel, who summoned a 5000 year old djinni to do his bidding. This unwilling djinni, Bartimaeus, had no choice but to do what the little warlock asked of him. More like, ordered him to do.

The quest was simple, it was to steal an amulet from a powerful magician, Simon Lovelace. Now, not knowing that the amulet would bring them a lot of problems, the duo decided to agree on the deal.

Then, the expected happened, and Bartimaeus found himself tangled with the young Nathaniel, trying to escape plenty of attacks and problems thrown their way.

If one died, the other would be doomed. And the only way they both could survive was to stick together and work as a team.

Bartimaeus is one of the greatest things in my childhood. It taught me a lot more than I thought it would. And Mr. Stroud wrote in such a way that we couldn’t help but go with the images painted in his words.

It was as if we could envision his settings. We were soaring high, looking at planes through Bartimaeus’s eyes and mocking literally everything in his witty tone.

We couldn’t help but root for Bartimaeus as well. The demon grew on the readers. And we wanted him to be our hero.

And as much as I questioned the pairing, I was quite upset when their story had to end. I wanted more of Bartimaeus and Nathaniel. I was hoping their stories would continue and the book didn’t have to end.

When I knew the ending was coming, I refused to flip the pages, avoiding the ending.

That is why, I had to buy the next book.

Bartimaeus: the Amulet of Samarkand is an 8/10. It is the kind of tale that is warm. One that you can reopen and revisit over and over again. It’s one of those tales you can read on a rainy day with a cup of warm tea keeping you company. It’s one of those magic touches you need to make you look around and wonder, “What if?”

2 thoughts on “Book Review: the Amulet of Samarkand by Jonathan Stroud”